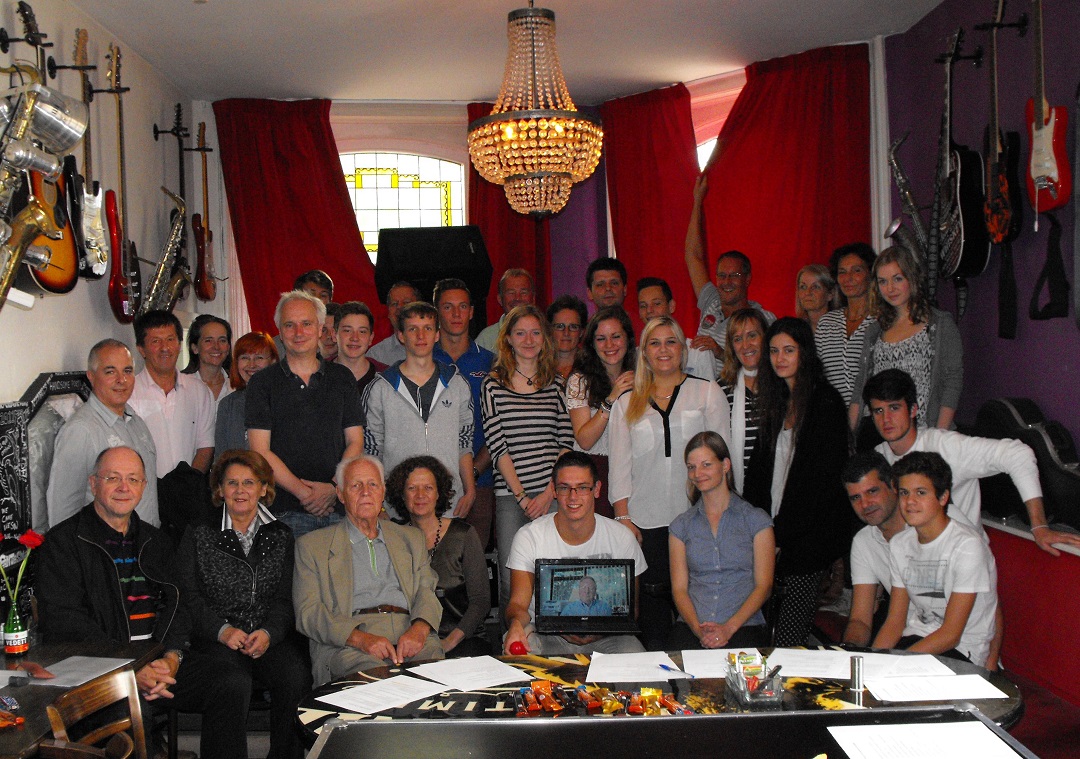 25 years after the last meeting in Amsterdam, the time had come to return to this beautiful which happens to be the capital of the equally beautiful Netherlands. The family Bergsma took the lead to organise this meeting and this was wonderfully done, compliments for that! Everything started on the Friday (26 September) in the ‘Backstage Hotel’, which was designed as a backstage, as the name probably tells you. A hotel full of signatures and music instruments was the basis for our three-day stay in Amsterdam. Here is the programme that made this weekend a great experience.

Friday evening was set as the arrival time for most of the meetings’ attendants. Tanya was picked up from the airport Schiphol, as she flew in from the North of Spain. After the check-in there was time for some dinner. Most of us ate on the old square Leidseplein in the very city centre, surrounded by canals, street performances and a lot of joy. As this year, the amount of youth was incredibly high, we did a little walk around in the city during the rest of evening (and night) and sat down for a few drinks.

Saturday morning, breakfast was served in the hotel and the family Mol arrived with Mariet who had already made lunch before we even had our breakfast… Anyway, after breakfast we walked towards Leidseplein where we had our dinner the day before. This was the place where our sightseeing trip would start. However, walking wasn’t needed, because this trip was done by boat. Accompanied by a true ‘Amsterdammer’ we sailed through the canals of the old city of Amsterdam. We passed among others the Rijksmuseum, the red-light-district, the renovated central station and many, many bridges (ouch). A little break to stretch our legs and have a coffee helped to enjoy the 3-hour boat trip during which we also ate the lunch made by Mariet and Ed’s brother. But, the best part was of course the being together; sharing memories with some you hadn’t seen for years or talking about all the happenings that we had over the year. This remains the most exciting and important part, this has been the main driver of the organisation for 32 years.

The afternoon, we were ‘off’, everyone was free to choose what part of Amsterdam they wanted to visit. Some spent a lot of money in the P.C.Hooftstraat and Kalverstraat, the largest shopping streets in Amsterdam, whereas others walked around to explore the city centre and enjoy the time by being together. This was continued in the evening, when we had our dinner in ‘Restaurant Lieve’. At that time we had a group of over 40 persons, three tables filled with internationally-minded people, of which one table was crowded with youth. Incredible. Most of the dishes were well thought of and accompanied by some wine and drinks, and so the evening passed with Professor Weise watching over the community he helped create. Some of the adolescents explored Amsterdam by night.

Sunday morning is usually reserved for the discussion. The board was reinstalled, a Skype connection with Mr. Mucklejohn in England was made and the scholarships were complemented on their performances at Vacational Studies this year. Well done Alex, Jasper and Pia-Marie! New scholarships were proposed and accepted for the coming year, who of course will have ‘days they’ll remember all their lives’. Unfortunately, the meeting had to come to an end at some point. As some final coffees were consumed, everyone said ‘see you next year’ to each other and the meeting in Amsterdam was over.

Our final thanks to Ed, Mariet and Pim for organising this incredible meeting and see you all next year in Madrid!